Yurbuds do not fall out….thank god for their new twist and lock technology I can finally get some ear phones that last all the way through my workout. As an added bonus my friend from high school Jesse La Flair is on the back of the head phone case doing a wall flip. He is a parkour professional that just recently made it to the championship rounds of American ninja warrior. I recommend reading up on these head phones below and then buying them. If you want to test them out doing some cool moves head over to Jesses page and learn some parkour.

The Yurbuds Ironman Series Inspire Earphones are the ultimate solution to lackluster ear buds that hurt and fall out during activity. These sport earphones feature Yurbuds’ patented TwistLock Technology. They are guaranteed to stay in place and deliver pure, exceptional sound quality that rivals much pricier earphones. These earphones are a must for runners, walkers, triathletes, weight lifters, cyclists, skiers, snowboarders, skateboarders, hikers, climbers, or anyone who needs their music to keep up with even the most intense activity. Simply put, they are earphones that won’t fall out, guaranteed. The Yurbuds Ironman Series Inspire Earphones come with a carrying case, two sets of silicone enhancers, and our premium sport earphones. They feature a universal 3.5mm (1/4″) gold-plated stereo plug that works with iPods, iPhones, mp3 players, and most other cellular phones. For a full compatibility list, please contact info@yurbuds.com.”Because Yurbuds are comfortable over long periods of time and stay in place even while sweating, they’re perfect for runners, bikers, and amateur athletes who are looking for a headphone solution you barely even notice”

Legs and Core! What else is there….

Heres a new warm up for you!

You start young, you learn the rules, you get results…..end of story. For all the people who think fitness doesnt make a difference if you stick to it, watch the video..Thanks for coming..

Life Aspirations in a Song…

Something so simple and so smooth just makes me feel better. Sorry we lost this wonderful man to his health struggles. But his music is untouchable, gurantee you all know his songs.

Ipads more important then activity? Which would you choose for your children!

Sometimes it’s the perfect toy to keep a cranky 2-year-old quiet, or maybe your 6-year0-old is begging to play the latest game app. A new study has now taken a first-ever look at children’s use of new digital media devices. The study, by Common Sense Media, finds the devices are quickly becoming a part of a children’s world.

Researchers surveyed omore than 1,300 parents of children up to age 8. They found that 40 percent of 2- to 4-year-olds, and 52 percent of 5- to 8-year-olds have used smart phones, video iPods, iPads or similar devices. Even infants are not immune. Ten percent of those under age1 have handled one of these devices. The kids are playing games, watching videos, or using other apps. On any given day, 11 percent of those up to age 8 are using one of these devices. Those who do may spend as long as 43 minutes on the device.

While this trend may be growing, the youngest media consumers still spend far more time in front of a television than they do on one of these mobile devices. Those up to age 8 spend an average of one hour and  40 minutes watching TV or DVDs on a typical day. And those under age 1 spent about 53 minutes, more than twice as much time as they spend being read to.

The American Academy of Pediatrics recommends no television for those under age 2. The group doesn’t have a position on this new media and its affect on children. Study authors say they’re hoping their data will start a discussion on whether this type of screen time is any better or worse for children than TV.

Kids are also mimicking their parents in another modern past time- media multi-tasking. Nearly a quarter of 5- to 8-year-olds use more than one media most or some of the time.

So when is to young? When will you tell your kids to go outside and play isntead of sitting on the couch? Whats it going to take to realize that this is the start of inactivity and obesity that is running rampid through our country and dominating our youth. This is not the only problem but its a big enough one to address. Small things like inactivity lead to our national physical education standards being lowered every year, and we should not be lowering standards just so more out of shape youths can pass. We should be changing the problems and teaching them how to pass the standards original set for them.

So would you rather your students and children look like this? 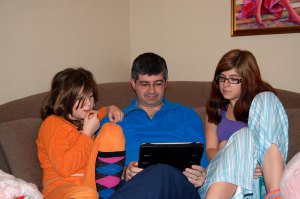 While there is always room for more then one type of thing in life, which one would you choose for your children? Can you see habits being formed? Lets get our youth active and loving life long fitness so they dont have as many heealth risks as our generations. Who knows what they can accomplish by going outside and getting their exercise, the skys the limit. Maybe they will look like this: Sorry video isnt working today, click link below:

You cant learn that on a smart phone….